Last week, 21-23 September, it took place the European MySQL Conference, or “Data performance Conference” as this year’s subtitle was “MySQL. NoSQL. Data in the cloud.”. This year, it changed its location from London to Amsterdam and, as most people I talked to agreed, the change was for good. As every year, Percona was the company organizing it, but it had the participation of all the major players in the open source MySQL/MongoDB/Cloud data world. Special mention goes to Booking.com, which had more talks than usual (despite being one of the largest MySQL users out there), and were the hosts of the community diner (and probably one of the main reasons to moving to Amsterdam, as their main HQ is at that city).

While MySQL was still the king in terms of interest, I saw a growing interest for MongoDB, both from Percona (now owning TokuDB, and releasing its own Percona Server version of Mongo) and from Facebook, promoting its project RocksDB (its much improved fork of LevelDB, with both Mongo and MySQL frontends). Both are interesting offerings for write-heavy workloads with better compression ratios than other engines, but lacking of some features to be ready for everybody’s production usage. However, I have high expectations from both projects.

There were also many talks about MySQL high availability models, with different points of view. While some are pushing for its the upstream GTID-based setup, others opt for alternative GTID implementations; others, for the usage of dedicated binlog servers, while others have a hybrid approach.

Obviously, MySQL folks from Oracle were present and gave many first party sessions about the soon-to-be released 5.7 and its new features regarding query optimization, performance_schema, internals, etc. But the best part of the conference was, without doubt, being able to interact with the developers and suggesting features for 5.8, face-to-face. I think many people loved that and it should be a regular thing from now on.

In a more personal way, for me it was great to devirtualize some people for the first time, plus get to catch up with others I already knew about both professionaly and personally. I had the chance to talk to people from all the previously mentioned companies (Percona, Facebook/RocksDB, Booking, Oracle) and also representatives, developers and DBAs from Google, Vividcortex, Solarwind, MariaDB, VMWare, Galera, Pythian, Github, Freelancers and more. 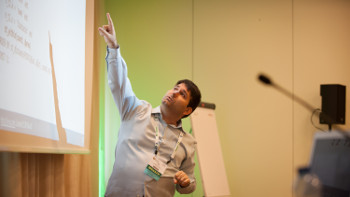 I was a speaker in one tutorial and a session: “Query optimization: From 0 to 10 (and up to 5.7)” and “MySQL at Wikimedia: How we do relational data at the Wikimedia Foundation”. I had a full room for the first tutorial, while having very good feedback on the second one, with many people wanting to either contribute or apply for a job with us.

I’ve seen that many of the other speakers have not yet uploaded they deck of slides, and I want to encourage to do it (sadly there were so many at the same time that I could not attend to all of them). You can see and download mine at Slideshare, too: Query Optimization Tutorial / MySQL at Wikipedia. Both are released with Creative Commons Attribution-ShareAlike-4.0 licenses and you even can get the source file of the 238-slide tutorial, developed over almost 2 years while I was a freelance DBA, and improve it, remix it or modify it as you want, if you keep it equally free.

Additionally, a reminder that if someone wants to contribute to our (Wikimedia’s) infrastructure, we are glad to accept patches from the community on our puppet repository and also have several remote positions open, including a Database Administrator profile.

See you next year!