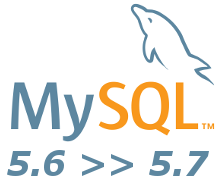 While doing some testing (that I published later here) on the still-in-development MySQL 5.7 I wanted to do some analysis on the configuration to see if the changes in performance were due to the code changes or just to the new MySQL defaults (something that is very common in the migration from 5.5 to 5.6 due to the default transaction log size and other InnoDB parameters). This is a quick post aiming to identify the global variables changed between these two versions.

You could tell me that you could just read the release notes, but my experience (and this is not an exception, as you will see) tells me to check these changes by myself.

I do not include changes in the performance_schema tables, as I was running these particular tests with performance_schema = OFF. I also do not include “administrative changes”, my name for variables that do not influence the behaviour or performance of mysql, like server_uuid which will be unique for different instances and version and innodb_version, which obviously have been changed from 5.6.20 to 5.7.4-m14. Please note that some changes have also been back-ported to 5.6, so not being shown here, or were already available in previous releases of 5.7.

Variables that have changed its value

In summary, some interesting changes, only one default change that may alter the performance (eq_range_index_dive_limit), and nothing that will create problems for a migration, with only two own-predicted exceptions:

Instances of the (useless for a long time, as mentioned above) variable innodb_additional_mem_pool_size failing with:

, which just should be deleted from the configuration file.

And the expiration time set by default to 1 year, that may create lots of:

or even create some difficult-to-debug problems in older drivers, as we had experienced with this functionality in 5.6. I would like in particular your opinion about software defaults for password expiration, as I do not consider myself a security expert. As usual, you can comment here or on Twitter.

EDIT: Morgan Tocker, from Oracle, has commented via twitter that “innodb_additional_mem_pool_size had been useless for a long time (since the plugin), and that the reason for the change now is the additional problems of parsing but ignoring options“. I am not complaining about those changes, I actually think that they should have been done long time ago to prevent those very errors, I am just putting here a solution for what I think can be frequent mistakes on migration. Incompatibility is sometimes the way to go.